Skip to content
Cart
Now reading: How a Fine Dining Chef Turned a Request for Plant-Based Options Into a Thriving Vegan Product Line
Share
Next

Chef Craig Thornton didn't plan on selling boxed mac and cheese, but when his efforts to accommodate plant-based guests caught the eye of an ex-Unilever exec looking for an eco-friendly pivot, Howl was born

“They get cooked once and then they’ll get cooked again,” he says before putting them in the oven. He is preparing the potatoes to be served at one of his tasting menu events that night.

Thornton launched his acclaimed underground dinner series Wolvesmouth in 2010 and added the seafood-focused Sharksteeth in 2015. Neither concept is vegan, but Thornton describes them as produce-heavy.  “Produce in general is just far more interesting,” he says.

The chef, who has been profiled by The New Yorker among many others, is known for his uniquely dramatic and artistic approach to cooking. Yet, he stays sensitive to what his customers want and need. “I think that you have to respond to what people are actually gravitating towards and try to listen to what they actually want,” he says. “You’re in the hospitality business so, you’re going to accommodate.”

That means paying attention to the growing requests from diners for plant-based options. “We would get a lot of people who were dairy-free,” he recalls. “Over time you could kind of see the change, doing dinners night after night. It became very common.”

He answered by developing a crowd-pleasing vegan cashew sauce, available for those who wanted an alternative. The sauce soon became a buzzed-about menu item of its own. “I thought, ‘One day I want to do something with this,’” he says.

But it wasn’t  easy to turn his small-batch supper club sauce into a large-scale operation. He quickly realized the challenges of attempting to produce his beloved cashew sauce en masse without losing the integrity of its ingredients. It took years  of working on it – and an eventual connection with Fred Michaels, the brother of a friend, who at the time worked for Unilever with big name brands.

“It’s very difficult for these brands to create innovative foods,” says Michaels of the brands he worked with at Unilever. He left his job there in 2017 to team up with Thornton full-time to develop and launch Howl, a line of shelf-stable vegan products. The first release from Howl is an entirely plant-based boxed macaroni they call Mac & Chef. 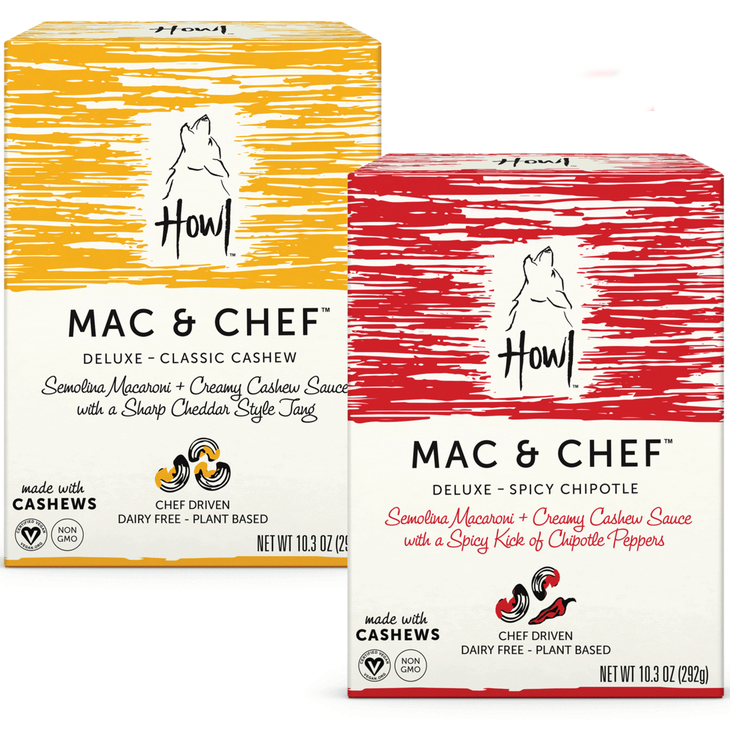 “I realized I needed to have a positive impact on the world around us,” says Michaels of leaving a Fortune 500 corporation to go in on a new start-up with a chef, but the timing felt right. “When I met Craig I had been going more and more plant-based myself. I think our reliance on animal agriculture and seafood and dairy, it’s just becoming a lot more indefensible.”

The pair didn’t want to stop at simply making animal-free food, but rather look at the full impact of their product, from sustainably-sourced ingredients to eco-friendly packaging.

“‘It is one of those things where we could do well and do good at the same time and just do something positive. We just had a very similar philosophy with what is wrong with food systems,” says Michaels. The two took issue with the fact that some other packaged vegan food options on the market are made using palm oil.

“Palm oil is a very destructive ingredient,” says Michaels. Howl’s Mac & Chef sauce is different because it is made entirely of cashews rather than emulsified oil. “I’d even just think about the idea of having a glass with oil in it, and a glass with cashews in it, and then go to somebody and say, ‘What would you rather eat for dinner?’” says Thornton comparing his sauce to other non-dairy options. “Every step of the way somebody wants you to do a shortcut because it is cheaper, easier, faster, all these other things. So, you’re literally battling headwinds from start to finish, trying to make the product itself.”

Thornton turned the obstacles and discouragement into motivation. He tinkered with the product until it was right, and eventually took time off from his fine dining series just to hit the road, personally meeting with manufacturers to find a production facility up to the job. Once it started rolling off the line, Whole Foods put in an order to carry Howl in 500 stores across the U.S.

In May 2020, in the middle of the pandemic, Mac & Chef finally hit shelves.

“It’s been a little bit chaotic,” says Thornton noting the unfortunate timing. Though grocery sales were up, shoppers were prone to buying familiar items versus newly-launched ones. “There were a lot of headwinds in that regard, but I think we got through it all right.”

Howl Mac & Chef can be now found in both Whole Foods, Besties Vegan Paradise, and Thrive Market; the partners say they plan to launch a vegan queso dip and gluten-free products in the near future.